The Transport Workers Union of America Local 514 (Tulsa workers) in conjunction with the TWU/IAM Association (representing 30k workers nationwide) have been in contract negotiations with American Airlines since Dec 3rd, 2015. It has become clear that what was once thought of as a good idea to merge American Airlines with US Airways has now become an unwelcome reality.

American Airlines has been doing much of its own maintenance in Tulsa dating back to 1946. For decades American has been one of Oklahoma’s largest employers. That trend started shifting after 911 and continues to this day. American, United, Delta and Southwest Airlines started outsourcing USA jobs to low cost foreign maintenance facilities all the while growing the 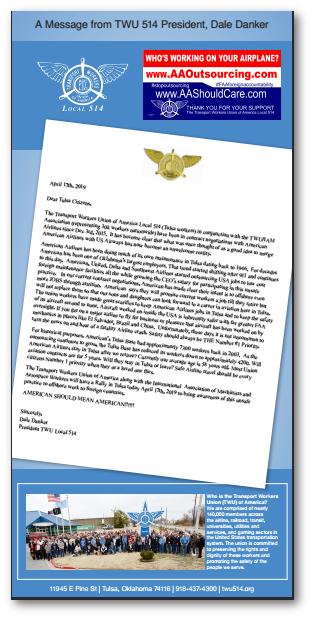 CEO’s salary for participating in this unsafe practice. In our current contract negotiations, American has made clear their intent is to offshore even more JOBS through attrition. American says they will promise current workers a job till they retire but will not replace them so that our sons and daughters can look forward to a career in aviation here in Tulsa. The union workers have made great sacrifices to keep American Airlines jobs in Tulsa and to keep the safety of its aircraft second to none. Aircraft worked on inside the USA is inherently safer with far greater FAA oversight. If you get on a major airline to fly for business or pleasure that aircraft has been worked on by mechanics in places like El Salvador, Brazil and China. Unfortunately, these days it is not uncommon to turn the news on and hear of a fatality Airline crash. Safety should always be THE Number #1 Priority.

For historical purposes, American’s Tulsa Base had approximately 7300 workers back in 2003. As the outsourcing continues to grow, the Tulsa Base has reduced its workers down to approximately 4200. Will American Airlines stay in Tulsa after we retiree? Currently our average age is 58 years old. Most Union aviation contracts are for 5 years. Will they stay in Tulsa or leave?

Safe Airline travel should be every citizens Number 1 priority when they or a loved one flies.