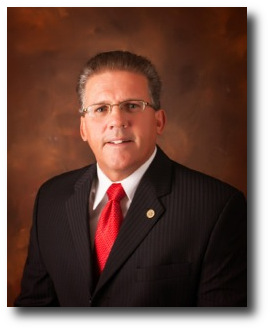 It is with a deeply devastated heart that we share with you the passing of our brother Gary Yingst.

Please keep his Family in your thoughts and prayers.

The following was written back in 2015 by Gary as he served as Vice President of local 514.

Gary Yingst was born on October 5, 1958 in Tulsa, Oklahoma and attended McKinley Elementary, Bell Junior. High, Collinsville Junior High, Hamilton Junior High, Collinsville High School and Graduated from East Central High School in 1977. He was State Champion and the Outstanding Wrestler in the State of Oklahoma in 1975, and Captain of the 1977 East Central State Champion Wrestling Team.

Gary received a full wrestling scholarship to Claremore Junior College from 1977 through 1979, and was a two (2) year starter on the Wrestling Team. In 1980 Gary went to work as a Machinist at Airico Machine Shop and remained there until December of 1985. This invaluable experience allowed Gary the ability to move his career forward and was hired by American Airlines on December 16, 1985.

Gary was 27 years old when he was hired at American Airlines in 1985 and began his travels as a union officer for the Transport Workers Union of America (TWU), Local 514. In 1986 Gary ran for Shop Steward against three (3) senior Machinist and was elected for his first term and continued to be elected for the next eight (8) years. In 1987 Gary was appointed to the Trade Test and Education Committees where he served for seven (7) years. In 1995 Gary was elected to the Executive Board and immediately began to arbitrate cases for both termination and contract article violations. He attended the George Meany School of Labor studies where he completed Arbitration Preparation 1 and 2, Arbitration Brief Writing, Costing out of Contracts for Negotiations, Financial Secretary Treasurer School, Union Leadership and your Role and Contract Language Writing. In an effort to move forward as a Union Officer in 1998 Gary ran for and was elected to the vacant Vice President position of Local 514. He then became responsible for the Grievance and Arbitration Committees overseeing Tulsa, Oklahoma; Oklahoma City, Oklahoma; Little Rock, Arkansas; Memphis, Tennessee; San Antonio, Texas; and El Paso, Texas; that represented over 8,000 TWU members and four (4) Contracts.

In 2000 Gary was asked to join the International Staff of the Transport Workers Union of America in Hurst, Texas for the upcoming American Airlines (AA) negotiations. As a member of the Staff he became Co-chair of the 2001 negotiations directly overseeing the eight (8) contracts, Maintenance and Related, Fleet Service, Stores, Maintenance Control Technicians, Dispatch, Simulator Technicians, Meteorologist and Dispatch. Gary was elected at the 2001 convention to International Vice President and named the AA System Coordinator responsible for 22 locals, eight (8) contracts and 33,000 members. In 2003 he was asked to oversee the negotiations between American Airlines and the TWU members in an effort to remain out of Chapter 11 Bankruptcy. Then in 2005 he was re-elected to International Vice President. As an International Vice President he was also a member of the Appeals Committee, hearing disputes from members who appealed decisions regarding actions taken by the Locals against them. In 2006 President Mike O’Brien resigned due to personal health issues and as result Gary was asked to take over the Airline Transport Division (ATD) as the ATD Director responsible for 44 locals and 65 contracts across the United States. Unfortunately, in early 2008 he was diagnosed with a bone disease requiring a double hip replacement. Gary determined it would be in the Unions best interest if he resigned as the ATD Director. After a year of undergoing surgery and rehabilitation he returned to work at the ATD office and immediately went to work negotiating AA and AE Dispatch contracts. In late 2008 he was asked to move to Miami Florida to oversee the service contracts at Cape Canaveral (6), Cape Kennedy Space Center (6), Kings Bay Georgia Nuclear Submarine Base (5), Fort Gordon Army Hospital in Augusta, Georgia (6), Airbus Services Miami, Florida (1) and Library of Congress in Washington, D.C (3). Gary was a frequent speaker at the (APFA) Association of Professional Flight Attendants Conventions and Board Meetings, and participated in numerous Arbitration seminars as a panel member and guest speaker.

In 2009 he resigned his staff position and moved back to Tulsa to be close to his family. He immediately went to work in the Landing Gear machine shop where he became the Shop Steward and remained Steward until July of 2013 when again, he ran and was elected to the Vice Presidents position.  Gary finished out his time with us in the machine shop.

As you can see, Gary has done more than any 10 people for labor and this local. He will be missed by his family and friends. But the loss of a man like Gary Yingst to the American Labor Leadership will be felt through out this land where Corporate Greed rules the minds of those less confrontational.

Rest in peace my brother.