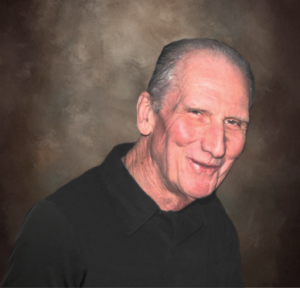 We are saddened to share with you the passing of retired brother Ervan Stallbaumer on January 12, 2022.

Ervan was an Aviation Maintenance Technician with American Airlines from 1957 till his retirement in 1993.

Please keep the Stallbaumer family in your thoughts and prayers.

Celebrating the Life of Ervan C. Stallbaumer, in his own words…

I was born on the farm near Kelly, Kansas to loving, Catholic parents – Suitbert and Elizabeth (Hutfles) Stallbaumer. The second oldest, and oldest son of 13 siblings, who I warmly referred to as “my kids”. My first, last and fondest memories were living on the family farm, South of Corning, KS. I was responsible for getting my younger and some less scholastically-enthusiastic siblings to St. Patrick’s Catholic School. Although I got everyone there and enjoyed learning, sometimes I would ‘get lost’ at Rempes’ on my way home. One time on our walk home, my closest brother, John and I found prohibition whiskey, hidden in a culvert. Their loss was a happy day for daddy! Another one of my favorite memories was playing baseball with our young and exuberant school teacher, Sr. Hiliary, who never missed a step even while wearing a full habit. When I wasn’t in school, I was working on our farm or for one of the neighbor’s who didn’t have sons. At the time it wasn’t funny, but now I can laugh about the time I planted corn too close to the road. I did better the next time.

“Uncle Sam” took me away from Kansas early, but instead of answering the Army draft where I would need to carry a gun, I enlisted in the US Air Force in 1951 where I received an invaluable education while serving as an Airplane Mechanic for four years in the 3502nd Maintenance Squadron at Reese Air Force Base in Lubbock, TX. Lubbock had the most beautiful sunsets. Although I missed my family and several of my siblings’ births were announced to me in letters from mother, my family remained 2nd most important to me, only to God. I don’t remember this, but my sister, Janice, told me that I would send money home so mother and daddy could buy Christmas presents for the kids. It’s also meaningful to me that I share how I always looked up to my older sister, Mary Ann. I would smile when my children would answer my frequent curiosities about “How’s Mary Ann doing?” with ‘She’s doing great, Dad – still living on her family’s farm’.

I never made it back to Kansas to live, and in my later years I wished I had never left. That’s why my final resting place will be near my mother, daddy and lots of my siblings in Sts. Peter and Paul Catholic Cemetery in Seneca, KS.

After being honorably discharged from the Air Force in 1954, I moved to Tulsa, OK where I worked as a mechanic for American Airlines for 37 years. My coworkers called me “Bomber”. I met my wife, Nora “Ann” Baker, at a young adults’ Catholic bowling event in 1961. We married in 1963 and enjoyed 55 years together before she preceded me in death in 2018. We were blessed with three children who we raised in the Catholic faith at our longtime parish and their grade school, St Pius X and then sent them to Bishop Kelley High School. I am survived by my children: Robert Stallbaumer (Shelly Hicks Stallbaumer, deceased in 2019), Rhonda (Brian) Wiles and Rosemary Stallbaumer, grandchildren: Kayla Tanner, Justin (Rachel Ann) Tanner, Cody (Erin Donaldson) Hicks, Caleb Stallbaumer and Alexa Wiles, great grandchildren: Parker Hicks, Wyatt Hicks, Maybree Staggs, Maddix Staggs, Maximus Staggs, Kaycn Danker, Kyler Danker, Anlee Tanner, and Jaxton Tanner, and my siblings: Mary Ann Grollmes, John (Susan Savago) Stallbaumer and Janice Stallbaumer Jenkins, and lots of nieces and nephews.

After moving from our Tulsa home in late 2017, I remained accepting of the changes. Ann’s sister, Christina (Myers) and her husband, Tom Branson, opened their home and lives to Ann and me, providing so much love and support, especially during Ann’s decline and passing. We shared many meaningful conversations and they kept me engaged, doing things that I enjoyed like growing tomatoes, working with my hands and watching my favorite teams on tv. Go Cubbies! My last three years were spent in Stillwater close to Robert and Rhonda. Before moving to assisted living at Golden Oaks, I lived with Rhonda and Brian with their daughter, Alexa nearby. Rhonda provided the most loving care through all of my health-related ups and downs and also made sure we went to mass each Saturday evening at St Francis Xavier Church.

I would be remiss if I didn’t mention two special friends. Anne Roberts was a lifelong “family” friend, to me and Ann. She visited daily when we lived in Tulsa and always remembered me with cards and phone calls when I lived in Stillwater. “Anne Roberts is a great friend. She loves me”. Katy Durán was another dear friend, a surrogate-granddaughter, who was supported by her husband, Ronnie and daughter, Amanda. Katy brought me so much joy, visiting me almost everyday before moving back to Costa Rica. We went to mass during the week and shared a hamburger and shake after.

Although I only lived at Legacy Village (memory care) in Stillwater for four months, the staff were amazing. My children told me that they will remain forever grateful for how selfless the Legacy staff were and how they welcomed me into their care. They are also appreciative to Fr. Brian O’Brien for providing me with the last rites, and the brief but gentle comfort provided by Traditions Health – Hospice Care.

When I departed this life for my greatest reward, my three children were by my side. Now I am reunited with my memories and my soul is at peace being united with God, Ann and so many of my family members who happily welcomed me to heaven. In addition to Ann and daughter-in-law, Shelly, I was preceded in death by my parents, six brothers: Daniel, Benedict “Butch”, Terry, Mike, James, Lester, and three sisters:  Lucille Eisenbarth, Margaret “Peggy” Osterhaus, and Barbara “Bobby” Osterhaus.

Rosemary and I reminisced often of these times and she helped me tell my story knowing that one day we will all be together again and we will rejoice.

On Saturday, March 5, 2022 at Sts. Peter and Paul Catholic Church in Seneca, KS a rosary will be prayed at 10:30 AM. The Mass of Christian Burial will be celebrated by Fr. Arul Carasala at 11:00AM.  Burial will follow at the church cemetery.