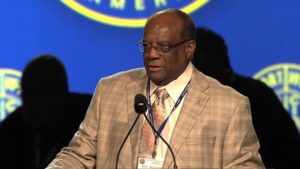 We write with heavy hearts to announce the passing of John Bland. It is said the arc of history is long, but it bends toward justice. Mr. Bland stood on the precipice of that arc to demand justice for all.

John Bland was TWU’s Administrative Vice President until his retirement in 2017 and the Director of the Human and Civil Rights Department until late last year. Mr. Bland joined the TWU when he began working as a bus operator at HouTran, now known as Houston Metro. During his career with our union, he served as a Local Steward, Local Vice President, Local Secretary-Treasurer, Local 260 President and Deputy Director of the TUUS division. Mr. Bland organized transportation workers in the Houston, El Paso, Aldine, North Forest, Dayton, Lufkin, Humble, Conroe, and Spring School Districts. He was a Vice President of the Texas State AFL-CIO, a Vice President of the A. Philip Randolph Institute, and President of the Houston chapter of the Coalition of Black Trade Unionists.

John Bland always fought for justice. On March 4, 1960, he helped lead Houston’s first sit-in at Weingarten’s grocery store lunch counter. He was one of 13 students from Texas Southern University who marched from campus to stage a nonviolent protest to end segregation. He was also a founding member of the Progressive Youth Association, which was instrumental in integrating Houston.

“As long as God gives me breath, I will keep fighting for the rights and the privileges of the underprivileged to get what we so richly deserve.”
-John Bland

John Bland leaves behind a loving wife, Betty, of almost 60 years, two beloved daughters, Dr. Debbie Bland-Nicholson and Fayetta Bland, and one grandchild, Jordan Nicholson. We lift his family up in our prayers and thank God for John Bland.